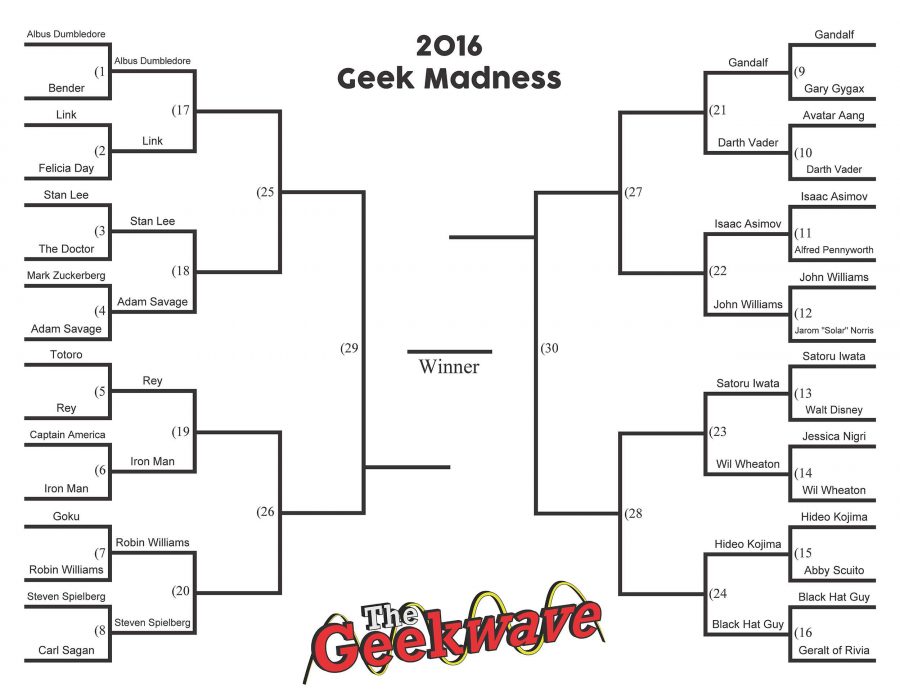 Woot woot! Round 1 is over, and boy was it fun! Our 32 Champions have now been reduced to 16, and my bracket is all sorts of screwed up! Sometimes you guys surprise us. I’m excited about the winners and the resulting Sweet 16 matchup.

So in round 1, we had only a couple of blowouts. Hideo Kojima completely destroyed Abby Sciuto, which may not be entirely surprising due to Abby’s position on the outskirts of the Geekdom. Likewise, Dumbledore demolished Futurama’s Bender, so sorry to whoever nominated those two television stars.

The winners who recieved 60-70% of the vote include Link beating Felicia Day, Adam Savage beating Mark Zuckerberg, Robin Williams beating Goku, Steven Spielberg beating Carl Sagan, Gandalf beating Gary Gygax, Isaac Asimov beating Alfred Pennyworth, Black Hat Guy beating Geralt, and John Williams beating myself (yay). Wil Wheaton was also able to beat Jessica Nigri, which you could probably argue was a popularity contest (which this is). The big upset to my bracket comes with Satoru Iwata beating Walt Disney, which I am completely fine with, but I definitely saw Disney garnering a lot more favor. Still, it was a hard matchup.

Our big topic for this round was the Captain America vs. Iron Man battle. This battle actually stayed tied for much of the race, and we delayed the closing of the poll just because it was so close. In the end though, Iron Man got a surge of votes and ended with 65% of votes. #TeamIronMan

Finally, there were two polls that ended with a less-than-ten percent spread. One of them was Stan Lee vs. The Doctor, a very noble fight between two massive geek icons. The other one was a little more surprising to those of us here at The Geekwave, and that was Avatar Aang vs. Darth Vader. With Darth Vader being such an ubiquitous part of The Geekdom, it was kind of awesome to see fans of The Last Airbender rally to get him so close to winning. In the end though, Stan Lee and Darth Vader still took the battles.

It’s always disappointing to see Geek Powerhouses go out in the first round because they were defeated by other Geek Powerhouses. Maybe next year we’ll have to do a losers bracket. For now though, Round 2 Voting is open over at kuteradio.org/geekmadness. Go check it out!