A TWILIGHT ZONE: The Flaming Lips/BI_ank 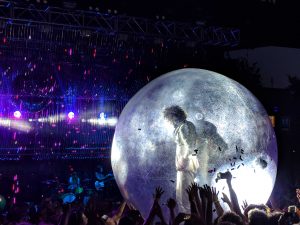 The drive up to Ogden from Salt Lake took longer than I expected. Took a wrong turn getting on the freeway which oddly enough ended up savings us time due to an accident on I-15. I walked into the open-air amphitheater as the first act was already playing. It was the musical project BI_ank from Nashville Tennessee. The crisp June air clung tightly to the surrounding bodies, filing swiftly around in preparation for the first show of the Ogden Twilight summer concert series. Based on last years’ Salt Lake Twilight concerts, this series would be even bigger . Tonight, would begin a spectacular summer line-up with the emblematic neo-psychedelic rock band The Flaming Lips. 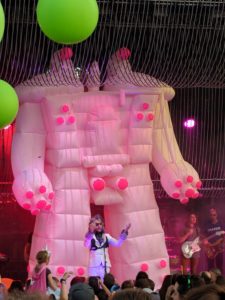 BI_ANK
BI_ank was a single musician drummer. His kit was rigged with a series of electronics, fx pedals, and other unknown gizmos. Despite his obvious talent, the music didn’t truly grab my attention. Songs showed potential but seemed to be lacking that key ingredient.
The Flaming Lips
The Flaming Lips spared no expense in terms of showmanship. They came onto stage playing “Also Sprach Zarathustra, Op. 30” by Richard Strauss. One of the most epic entrances I’ve ever witnessed. Throughout the show, stagehands were used frequently to bring different props on stage. Giant inflatable objects such as a pink robot, a rainbow, and eyes and lips, brought to life the conceptual nature of their songs. Singer Wayne Coyne even rode a life-sized flashing unicorn around the audience, many aptly dressed as unicorns themselves.
The Music 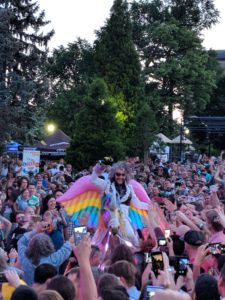 Each song was an entire production and a different experience in and of itself. Following the opening, The Flaming Lips played “Race for the Prize” and “Yoshimi Battles the Pink Robots, Part 1”. Their first 3 songs last nearly 30 minutes due to elongation and improvising. Coyne made frequent use of his microphone getting the crowd involved and asking them to see along. The audience, surely enough, did not disappoint.

The theatrics continued throughout The Flaming Lips’ setlist. During a cover of David Bowie’s “Space Oddity”, Coyne hopped into a giant inflatable ball that rolled above the heads of the concertgoers. They were on stage for 1 hour 45 minutes playing 14 songs, of which, only 11 were originals.
The Mood of Twilight
The band left the stage briefly with the word “love” ringing out repeatedly over the loudspeakers. Amid chants and screams, The Flaming Lips returned to stage to finish with “Do You Realize??”. It was a well-planned and executed show that I particularly enjoyed and left me eagerly awaiting the next show of the Ogden Twilight series. 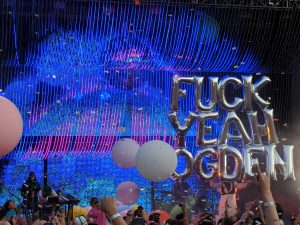