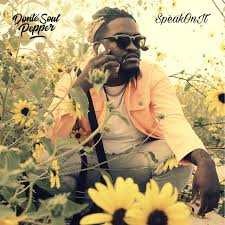 On December 5th, Berto and Tyki sat down to chop it up with North Salt Lake rapper and NBA Twitter troll, DonteSoulPepper. In this interview, we listen and discuss the making of Donte’s EP SpeakOnIt. During the interview, we joke and share stories from nights working at Buffalo Wild Wings, old tweets, and more. We also discuss the origin of Donte’s unique rap alias. We learn more about his recording process and how it was growing up in Ogden and Salt Lake. To SoulPepper, spontaneity is key. He likes his delivery to be natural all the time, as he says during various points in the interview.

Working with the likes of Utah rappers Jedi Steve and Horus, SoulPepper is hoping to collaborate with more local artists no matter the genre. On his song, “ThrowItAway” he’s able to blend the pop vocals of SLC singer/songwriter Brisel, while still flowing alongside Sanders Ayeah to make a bouncy trap and soul fusion. As far as what the future holds for the Ogden rapper, he’s motivated to do shows across the city. He wants to make more music, as he says, “I’m ready to just start recording again”.

Click the link below to listen to our interview with the wonderful and talented DonteSoulPepper!