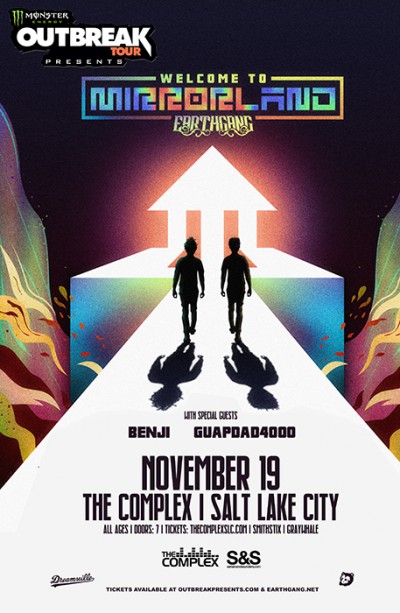 On November 19th, Atlanta’s EarthGang made their way to Salt Lake City for their Welcome to Mirrorland tour.

Pittsburgh based rapper, Benji., kicked off the show, setting the energy bar high for Guapdad4000 and EarthGang to follow. Benji. blew me away. He steadily gained momentum throughout his set until the whole crowd was cheering his name.

Next up was the Bay Area’s very own Guapdad4000, who did not disappoint. Guapdad began and ended his time on stage with “Costa Rica”, a hit from Dreamville’s Revenge of the Dreamers III, on which he sings the hook. He hadn’t planned to perform the song twice, but the crowd was craving more, so he capped off his set by performing the reprise from within the crowd itself. Here’s a video of the penultimate moment the crowd had with Guapdad4000.
EarthGang: The main event
Olu and WowGr8 (EarthGang) graced the stage around 9:30 to a primed and ready crowd. After their first song, Olu announced that “it’s gonna get hot” before removing his white fur coat; WowGr8 laughed as he watched on.

Before performing their hit song, “Proud of U”, EarthGang addressed the crowd, asking if they had come with someone they love, a friend, or just themselves. They said that regardless of who the audience was with, the duo wanted everyone in attendance to know that they were proud of them, repeating those words while pointing to audience members; at this moment everyone felt the love. Here’s a clip from their performance of that song.

Before performing “This Side”, the duo split the crowd down the middle and took ownership of their respective “sides”. The audience was dialed in and matched Olu or WowGr8’s energy as they invoked cheers from each side.

It was a treat to attend this show. The talent and energy that pervades EarthGang’s stage presence was a spectacle and I’m glad I was a part of it.

K-UTE Radio/University of Utah does not own the images in this piece.