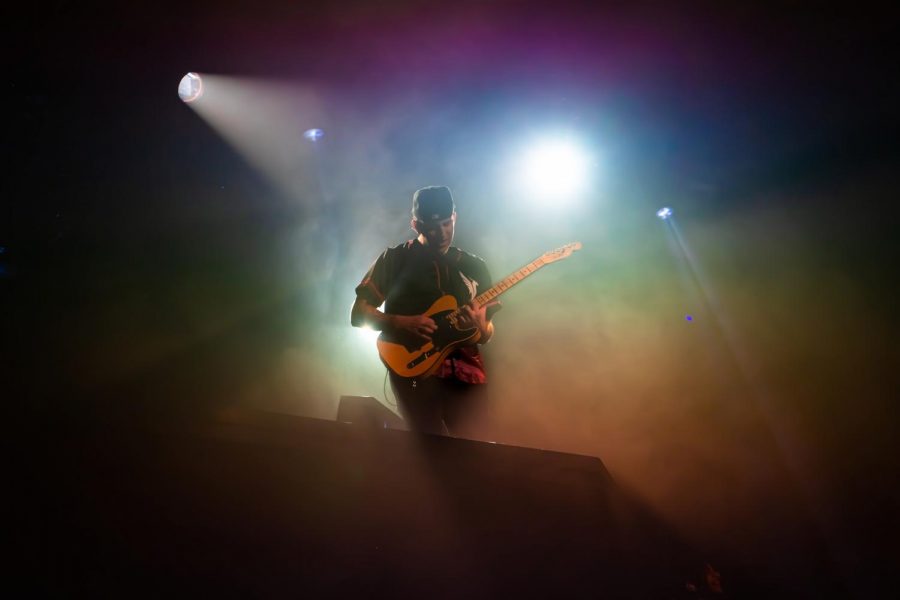 On Friday, November 22nd, EDM artist Illenium (real name Nick Miller) brought his Ascend Tour to the Saltair in Magna, Utah. Special guests Dabin and William Black performed before Illenium took the stage. Both supporting artists did an amazing job hyping up the crowd. The audience danced the whole time (and keep in mind, this concert was four hours long). William Black and Dabin both interacted with the crowd to keep them excited, which is always great to see in a multi-performance concert. The energy of the crowd just kept increasing as the night went on. Whether that was because of the bar upstairs or the incredible performers, I’ll never know. (Just kidding, it was obviously both of them).


Opening Acts: William Black and Dabin
The supporting artists played their own music, including lots of remixes. It was almost impossible to tell where one song ended and another began because of how well the different pieces mixed together. William Black played a few pieces from his new album Pages, and Dabin played some songs from his (somewhat) new LP, Wild Youth. I absolutely loved how much the crowd supported these artists. Usually at concerts the opening acts don’t get as much love, but at this concert I absolutely felt the energy from the crowd soar even before Illenium stepped on the stage.
The Venue and Crowd:
The Saltair exceeded my expectations. Well over a thousand, if not two thousand, people were packed into the (admittedly massive) dance floor and bar. The only other EDM concert I attended took place at a much smaller venue. However, the larger nature of this concert didn’t subtract from its intimacy.

I loved the atmosphere at the concert, largely because of the friendly nature of the audience. People were covered in glitter, someone dressed as Jesus, and another dressed as a unicorn. My favorite moment of the whole concert was when two guys, who had their arms covered in beaded bracelets, taught me the “Peace, Love, Unity, Respect” hand motions. They both gave me a bracelet. The first bracelet had a taco charm, and the second spelled out the word “ranch”.


Illenium:
The crowd buzzed with energy when Illenium’s set began. His hour and a half long set, like the opening acts, was full of original songs, remixes, and songs from other artists that had the whole crowd dancing. Many of the songs played by Illenium were from his new album, Ascend.

I always appreciate when live musicians perform at EDM concerts. There’s such a stigma that all concerts of this genre are just press and play. However, this absolutely wasn’t the case for Illenium’s set. He had a live drummer, Day Gatsby, a keyboard/vocalist, Annika Wells, guitarist, Dabin, and jack-of-all trades, Trevor Christensen (more commonly known as Said The Sky). In addition, Illenium actually brought out his guitar on a few songs.

My favorite moment of the whole show was the incredible encore. The closing songs prior to the encore were full of energy, as was the rest of the show. The set seemingly “ended”, and every single person in the crowd started chanting for an encore. After a minute or two, some audience members started leaving. It seemed like there wouldn’t be an encore. However, two spotlights illuminated merely seconds later.

Annika and Dabin appeared on the stage. There were no flashy lights, no lasers, and no electronics. They began performing an acoustic version of “Sad Songs”. Acoustic songs are a rarity in EDM concerts, and that’s what made this performance so special. Illenium wasn’t afraid to go against the norm. The final song was a mashup of “Good Things Fall Apart” and “Sad Songs”, and I’m pretty sure everyone in the Saltair got high off of the pure emotion in the finale.
Final Thoughts:

Overall, Illenium’s Ascend Tour was one of the best nights of my life. From beautiful acoustic ballads to thumping bass hits, there was a song to cater to every taste. The accompanying lasers and various lights hyped up the crowd and added even more energy to the night. The opening acts were incredible, and it was great to see Dabin perform during Illenium’s set as well. I felt so incredibly welcomed by the EDM community and am beyond excited for the next time Illenium comes to Utah.