Tobi Lou recently kicked off his “happy + extra sad” tour to a sold out crowd in Minneapolis, Minnesota on September 12th. He also had sold out shows in Kansas City and Denver before making his stop in Utah’s capital city on September 17th, 2019. This show was yet another full sellout, with more coming as the tour goes on. I recently wrote an artist preview about Tobi Lou and shed a little light on who he is; you can check that post out here.

Tobi’s show was held at local venue Kilby Court. Kilby is a smaller venue, but that doesn’t make it any less quality for a good concert. It was my first time at the venue and I must say that I was pretty impressed and will be attending more concerts there in the future. Continue reading for my analysis of Tobi Lou’s Salt Lake City performance!
Beginning of the show
After good performances from the openers, LilTrxpTendo and femdot, it was Tobi’s time to shine. The crowd was bubbling with anticipation, you could feel their ecstatic energy. Even though Tobi isn’t the biggest artist out right now, he has dedicated fans that couldn’t wait for this show.

At 9:30, the stage went from dark to colorful with the beat to “Just Keep Goin’”. The track is one of Tobi’s most defining songs yet and was the perfect opener for his show. Everyone roared when he stepped on the stage and started in on the track. After that, he addressed the crowd to their delight and started in on a medley of some of his other great tracks. 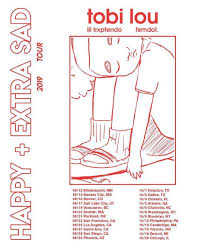 Tobi Lou plays a full setlist
One of the best things about Lou’s setlist for this show was the variety of vibes he threw out there. He went from the chill vibes of “My Party” to straight up bangers like “8702”, “Solange”, and “Like My Mom”. Later on, after a few power outages, he went on to play tracks from Live On Ice including “Sometimes I Ignore You Too”, “Theme Music”, “I Was Sad Last Night I’m Ok Now”, and more.

Throughout the show, you could hear the crowd yelling tracks that they wanted to hear over and over again. The interesting thing about that was when Tobi actually played those requests. Obviously that made everyone even more hyped and into the show. Tobi Lou’s crowd interaction was very good and made the show even better than it would have been otherwise.

Tobi Lou finished up the show by performing some of his most popular tracks including “Sadderday”, “Buff Baby”, and “Waterboy”. The crowd loved every minute of the show and showed him with huge cheers and thank yous as he left.
Standout moments
There really was a lot of moments that stood out during this show. During one of the power outages, Lou made the best of it and had a fan come on stage and do stand-up comedy. The crowd received it very well and it led into an acapella performance of “Like My Mom”. The superb improvisation of the power outage proved to me that Tobi Lou is a great live performer.

Another moment that I really liked was his performance of “Theme Music”. It was the first time he had ever performed it live and it was definitely amazing. The crowd interaction combined with his vocals and the beat were perfect. It was one of the most hype moments of the night and I’m glad I got to experience it.

Perhaps my favorite moment of the night was when Tobi performed the popular “Troop”, which usually features Smino. Obviously Smino wasn’t at the show, so Lou rapped one of Kanye West’s verses from “Flashing Lights”. Tobi is a proud Chicagoan and that was on full display during this dope performance. I really liked the nod to the Chicago legend as it shows that Lou loves where he came from. 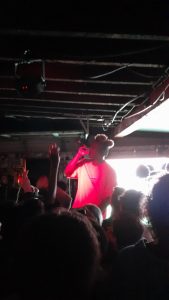 Final thoughts
There are only a few words that I can use to describe this concert: what a show. When the tour was announced, I was skeptical of how it would turn out due to the small venue. Those concerns left me immediately when Tobi started performing. This venue was perfect for him during this stage of his career and I’m glad that I went. He has amazing energy during his performance and his crowd interaction is top notch. Every time a fan would shout “I love you”, he would shout it back and didn’t ignore anyone.

As I said before, Tobi Lou isn’t the biggest artist out there right now. Even though that’s true, he is an absolutely awesome live performer that deserves to grow and entertain the masses. If you ever have a chance to experience a Tobi Lou concert, I would recommend you do so. It was one of the better performances that I’ve been to in the last few years. Tobi Lou is a very humble and talented guy and I think that will take him very far in this genre. 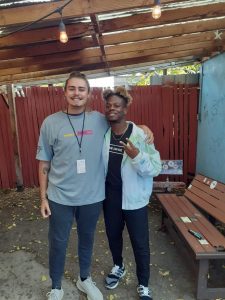