The K-UTE writing staff ventures to this year’s 7th annual Crucial Fest in a quest to discover new artists and experience a festival like no other in downtown SLC.
Sarah
After waiting months in anticipation, the first days of Crucialfest 7 were finally upon me, and I had no idea what to expect. First of all, I had never been to any of the previous Crucialfest shows, nor had I been to any “festival” style concert before. However, after seeing the setlist for Crucialfest 7, I couldn’t wait to go. 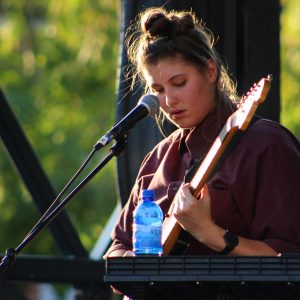 Upon entering, the band SALES was already performing. Their music was simple and minimalistic with soft guitar rhythms and drums. They also took a minimal approach to their live show; wearing casual outfits and rarely moving around the stage. While I’m typically a fan of theatrical and over-the-top concerts, I enjoyed how SALES let the music speak for itself. The band’s lead, Lauren Morgan, had a uniquely high pitched and nasal-y voice that contrasted beautifully with the toned-down instrumental. While I was a DJ a K-UTE, I became a fan of their two songs “Chinese New Year” and “Renee.” If you’re a fan of dreamy indie-pop, they’re definitely worth a listen. 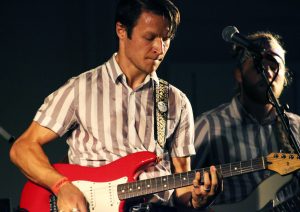 After their set, I thumbed through some records at the Greywhale Entertainment booth and made my way into a large gallery (presumably an emptied out shopping area). There, the local band The Boys Ranch was playing a set. I had seen them at previous shows, but never with their full band before. They played upbeat surf rock tunes and bounced around the stage in matching striped shirts. The Boys Ranch had charisma and confidence. The audience loved their energy, and so did I. 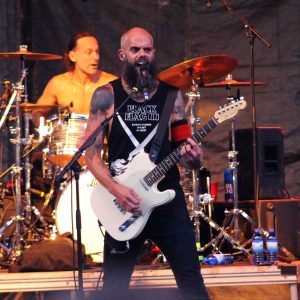 As I exited back into the main stage area, the band Baroness was playing. I had never heard their music before, but watching them perform was quite the show. The band’s lead, John Baizley, had a booming and full voice that soared over the heavy/progressive rock instrumental. The music was high-intensity and electric. I also noticed my eyes being continually drawn to one of the guitarists who played with such an intense emotion and passion. I definitely have an appreciation for bands who play with all of their heart; it’s a hard thing to do, but it makes the music all the more special and personal.

Finally, after Baroness’s set, the audience swarmed back over the main stage. The energy hummed in anticipation as an introduction track played for STRFKR’s entrance. Even though I had listened to STRFKR multiple times before, I had no idea what to expect from them in terms of a live show. Whatever I had in mind, however, was completely wrong. 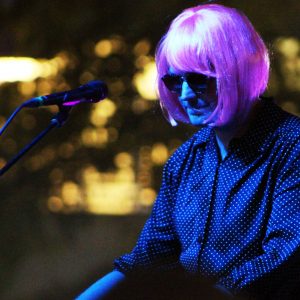 Fog that was pooled at the surface of the stage was immediately dispersed by the entrance of a crowd of men wearing full astronaut suits. I immediately knew that I was in for a show. The lead singer, Joshua Hodges, entered in a bobbed pink wig, sunglasses, and a dress. When I said that I was a fan of theatrical concerts, this was what I meant. STRFKR’s music is heavily electronic, which paired perfectly with the intense visuals. At one point, one of the “astronauts” flung himself into the sea of hands and started crowd-surfing; the audience was going wild.

I had no idea what to expect when I signed up to go to Crucialfest, but one thing’s for sure, I’ll definitely be going again next year.

Martyn
Two o’clock in the afternoon and rushing through downtown Salt Lake City on my way to the 7th annual Crucialfest was an apt way to arrive early in the day. For those who have never seen the mostly dilapidated Gateway Mall on Rio Grande street, the empty storefronts contrast against the finely manicured grass and comfortable sitting area. But for Crucialfest, the circularly fashioned mall was alive with two massive stages facing each other from either side, vendors, records for sale, a wonderful circus of noise and sights. We walked down the stairs with an aerial view of the festivities while King Dude played from afar. 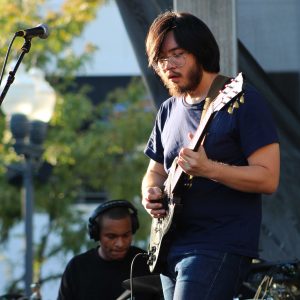 First up on the local stage was the (always-wanting-to-see-them) band, Indigo Plateau. A personal favorite of the Salt Lake scene, they opened the Exigent Stage (and the local side of Crucialfest). Playing original songs off of their solid EP The Heights along with some new ones, their passion and immaculate playing ability sounded rad through the converted Forever21 qua concert venue (which, aesthetically, was quite pleasing although the acoustics were less than tight).

After a windfall of music, eating, and constantly trying to find a place to sit, was the band Sales. Hailing from Florida, they have been to Salt Lake a few times. Their dreamy vocals and guitar playing played to a calmer atmosphere than the previous metal bands. The beauty of Crucialfest being a bevy of musical variety allowed one to move from the outside heat and main stage bands to the local stage inside. 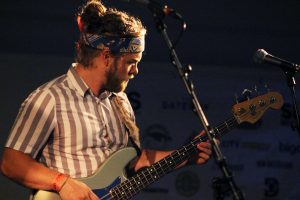 After a half hour of Sales, I made my way to The Boys Ranch gearing up for their unique brand of surf-rock. Again, these local heroes proved the significance of Cruicalfest as a way for people who may not experience the immaculate surf-rock to see something new. The Boys Ranch got the crowd into a frenzy of dancing and good beach vibes (being that this is a landlocked state, the irony is not lost). Surf rhythms and guitar riffs straight from the oceanside came through the venue. This is the type of band that feeds energy into a crowd and should always be a priority show when available.

Minutes after the local stage set ended, Baroness began playing outdoors on one of the main stages. A metal band incorporating some nu-metal influences. they hammered out their set list in a fury under the setting sun. The mix and mingle of the crowd between those now arriving for STRFKR and those here for Baroness were a gorgeous sight to behold. As the headliner from the metal influence of Crucialfests past. Baroness was well enjoyed and sounded great outside. 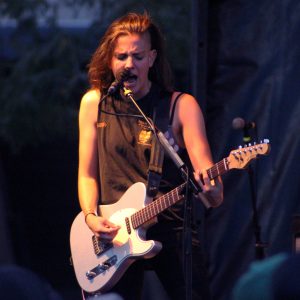 Some more minutes after Baroness had finished, the main stage was again lit in a flurry of anticipation as the crowd shifted eyes towards the approaching STRFKR. Opening with a quiet monologue piece set to electronic rhythms, the band came out in matching NASA astronaut suits, the band and dancers all synchronizing to lead singer Josh Hodge’s beautiful dress and pink wig. 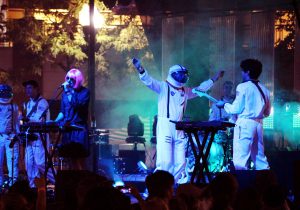 The band was essentially throwing passion into the audience even as an astronaut went crowd surfing on top of a large, inflatable white duck. STRFKR’s electronic sensibilities were heightened by the live performance where each song could cascade into lengthier versions of themselves. “German Love”, “In the End”, and “Open Your Eyes” each sounded like a new song. With the light show streaming from the background and the heavy draw of synths, guitars, and drums, STRFKR played an amazing outdoor set to end the night on. Better still, there was an entire day to go.