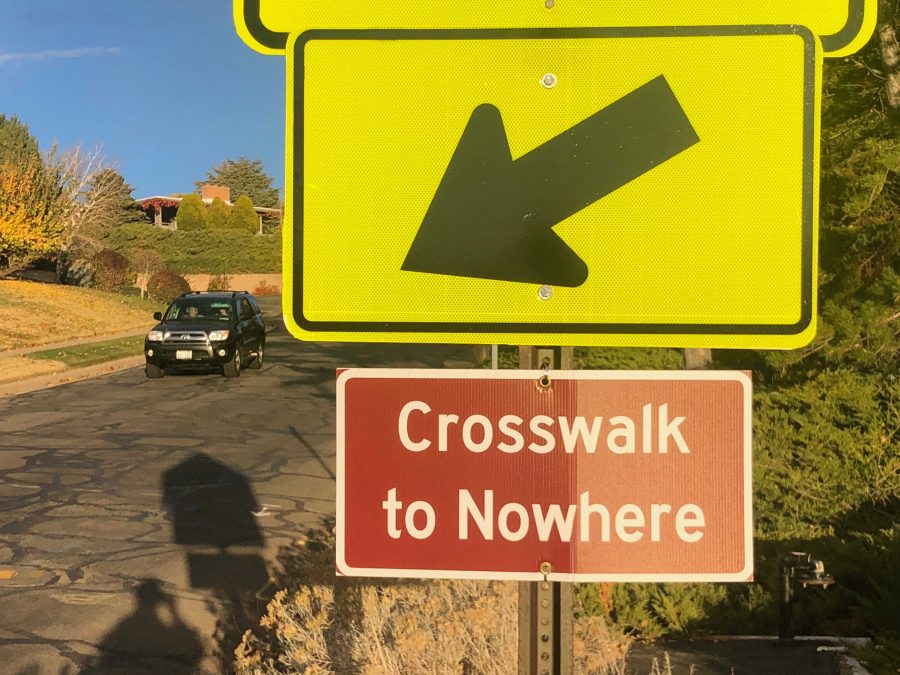 Crosswalks are not a destination
After all, the chicken is simply trying to get to the other side of the road. Maybe you’ve got an “aesthetic” photo you really want to take, but as it stands, the middle of a road doesn’t have a lot to offer. It’s not terribly safe either. Anyone who’s used a crosswalk at the intersection below President’s Circle can attest to this.

Despite the danger, most people will brave crosswalks. Whether it’s to get to the brand new Publik by the University or the pizzeria four doors down, we use them to get to where we want to be. But what about when there is no destination on the other side? What if, for some absurd reason, a crosswalk you found lead you to nowhere? It seems as unhelpful and meanspirited as manipulating the boundaries of an electoral constituency to favor one political party over another.
The “Crosswalk to Nowhere”
To find it, drive up I Street until you reach 13th Avenue. Once you’re there, you’ll be greeted by a five-way intersection. On the right, there are two possible routes, 13th Avenue, which goes directly east, and Northcrest Drive, which veers uphill. Take Northcrest Drive, and almost immediately you will find the crosswalk, marked by a standard crosswalk sign and another sign with its “official” title. 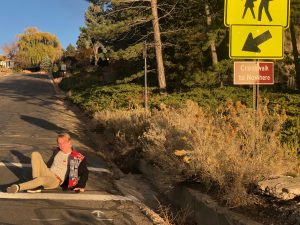 While the sign in question looks professional, it’s made out of corrugated plastic, and one has to wonder if someone took it into their own hands to give the crosswalk a name. After all, why would the city name such a crosswalk? It connects one sidewalk of insignificance to a gutter and a bunch of bushes.

In all sense of the word, the “Crosswalk to Nowhere” is frivolous. It is because of this quality, however, that I find it appealing. In a world that seems to have stopped making sense (or never made sense to begin with), it’s oddly refreshing to find a place that so eloquently conveys the absurdity. In his time with the Talking Heads, David Bryne was the master of not making sense. I cannot think of a better song to compliment the “Crosswalk to Nowhere” then the band’s similarly titled “Road to Nowhere”.