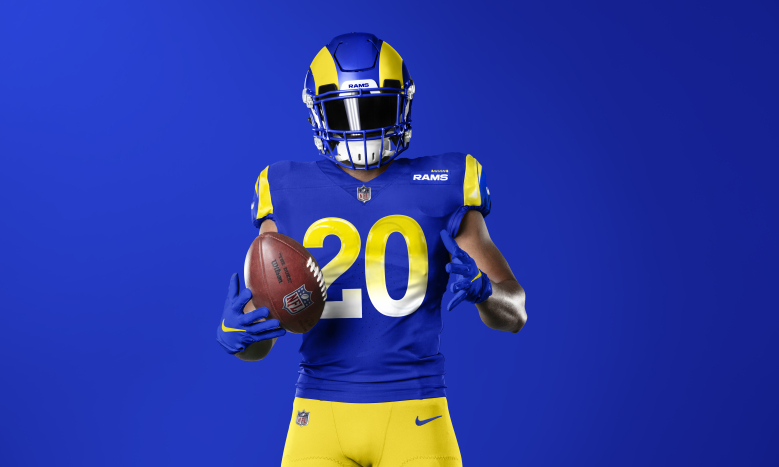 Alright, I’m officially at this point in the quarantine. There is nothing left. The stables are empty. We’ve eaten the horses. We’ve pilfered the supplies. We are out of options.

I will attempt to grade the slew of new NFL uniforms — which all made the convenient choice of dropping at the same time — and how they stack up to the jerseys being left behind.

There is an existential question that looms over all of this, which you can probably guess by now; Would any of this matter if there wasn’t a worldwide sports stoppage due to COVID-19?

The answer is a resounding “meh.” Maybe a footnote in preseason recaps, but not a full article about it.

No, we’re going in. Cue the X-Files.
Tampa Bay Buccaneers: A 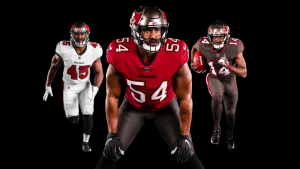 Among the first wave of new entries was that of Florida’s pewter-headed stepchildren in the Tampa Bay Buccaneers. The Bucs unveiled three new uniform sets, a home/away/alternate trio that hails back to the glory days of the early 2000s. I’m a little biased towards color-rush alternates, and the all-pewter kit looks particularly nice. Two big changes are the removal of shoulder decals and the number font. The brown shoulders didn’t offer much, and the old numbers harkened back to vintage alarm clocks. The Bucs simplified, and brought their uniforms into a modern age, but still upheld the legacy of better days. They did much better at that than the next team…
Los Angeles Rams: C
After a disappointing 9-7 campaign, the LA Rams needed to change things up. They released a bunch of veterans, moved into a new stadium, and rolled out four brand-spankin’-new uniform combos, as well as a new helmet design. This was likely changed to match the new base logo and ram’s head (despite the fact that former Rams great Eric Dickerson had some phallic comments on the head). 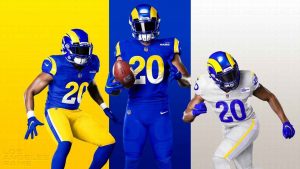 This one leaves me scratching my head a bit. There isn’t anything particularly wrong with the new uniforms, but with such a strong iconography, and a color combination that really hasn’t been imitated (at least well), why change it? Let’s go over major changes:

-the Horns: The helmet’s horns got a modern update, and are no longer solid. Makes sense for breaking up solid designs, but now they just look like the bolts dawning the lids of their crosstown counterpart (we’ll talk about them).

– The numbers: The numbers were slimmed, smoothed, and for some ungodly reason, they added a gradient to the color. Not to the electric blue on the chest (a color they nailed, by the way), but to white. You know, the color not present on the uniform. Oh, and it’s only on home kits. Away jerseys are solid. Applause for the bold step, but why? All you’ve done is outdate a classic uniform, and compel your fans (who are still pretty volatile after a move and a Super Bowl loss) to purchase new ones.

I can forgive the needless changes, but those numbers are atrocious. They turn an attempt to push the trend, to an overreach.

The only prop I can give the new look is the colors. They revamped the blue, kept the flashy, bright yellow, and the off-white away uniforms are a nice touch.
LA Chargers: A+
Now this is podracing. Wait, no, uniform design. Now THIS is uniform design.

Having essentially nothing to lose, the forgotten son of Los Angeles (besides the Clippers) decided to roll out six new uniforms for the 2020 season. And, to be honest, I love them all. There are a few notes though. 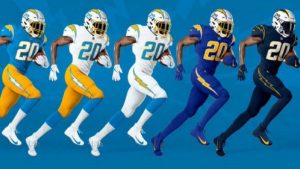 The blue: The Chargers fully understood that their money lay in the powder blue. Much like the Rams, this is a color that they’ve done extremely well, exclusively. There’s a certain identity that you establish when you nail a color, and the Chargers are completely aware of that. And, their new additions are just as enticing to look at.

Color rush/Alternates: The navy blue offers a more aggressive, energetic (get it — energy?) look, and the jet-black sixth piece uses a white helmet to generate (get it?) a great contrast. Every team needs a solid blackout uniform, I’ll defend that opinion till I die. They also mix the primary powder/yellow/white palette in different ways to complete the set. If you told me to buy one of these jerseys, I honestly couldn’t pick one. They’re all just awesome.

They also take advantage of their strength with the bolt. Because their logo is relatively straight, you can throw it in place of stripes, and it mixes the look up and gives it a Chargers stamp. They do that everywhere on the unis, but not so much that it’s overwhelming.
New England Patriots: B+
A 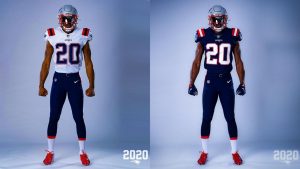 subtle set of changes from their old threads, the Patriots kept to their identity under Bill Belichick: Industrial, unimportant, unintrusive jerseys. And to their credit, the new designs fit the bill of what they were trying to do. Their old set was dated, the numbers weren’t flattering, and the gray pants didn’t really fit in. Now, with matching top and bottom colors, it presents a streamlined, sleek look. The one question I have is about the shoulder stripes. In all the pictures I’ve seen, they bend inward and look out of place with how square the stripes themselves are. I did see a few shots of the stripes squared to the player’s chest, which looked way better. Hopefully that’s what they were going for.

Cleveland Browns: A
Never one to stay out of the news, the Browns updated their long-standing uniforms, again bringing them into the 21st century. They had flashes of good design with their all-br 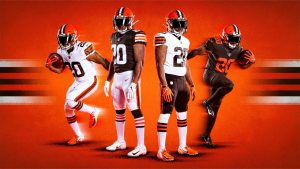 own color rush uniforms, but the original set needed a second look. Their new uniforms feature a new shoulder design, electric orange to replace the original pastel, and striped socks to throw fans back to the days of… whenever the Browns were last really good. Was I alive?

Atlanta Falcons: B
The Falcons took traditional design and turned it on its head with their new uniforms, for a couple of reasons.

Numbers: The blocky numbers with underlying secondary color will definitely take some adjusting, but look fine so far.

Colors: The matching tops/pants are a really nice touch. I think this trend is the color rush uniforms creeping their way back into the lexicon 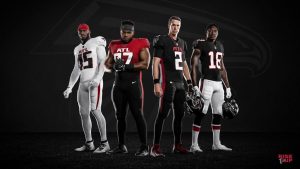 . The red stripe on the all-black home kits are particularly pleasing. The biggest change is the gradient from black to red on the secondary home jerseys. This one I’ll have to see in person to make a verdict on, but it’s not too intrusive, and doesn’t interfere with the player’s silhouette like the Ram’s gradient choices.

Retro: I need more teams to include a retro kit in their rotation. The Falcons’ throwbacks harken back to the days of the gritty, Dirty Bird Falcons, a heritage that is worth owning like the Falcons have. I’ll never get over how awesome that old logo is.

The one critique I do have, and the reason these aren’t getting an A, is the premise that they might be changing too much from one season to the next. It might be a bit of a culture shock, and because there’s clearly a stark contrast, I had trouble liking them at first. That changes the more I see it, though.

So what have we learned?

There’s a few trends that I see in this new outfit of outfits. A lot more monochromatic, some gradients, smoother numbers, and overall, simplicity. Teams want you to be able to recognize their jerseys from a mile away, but hopefully, for the right reasons.