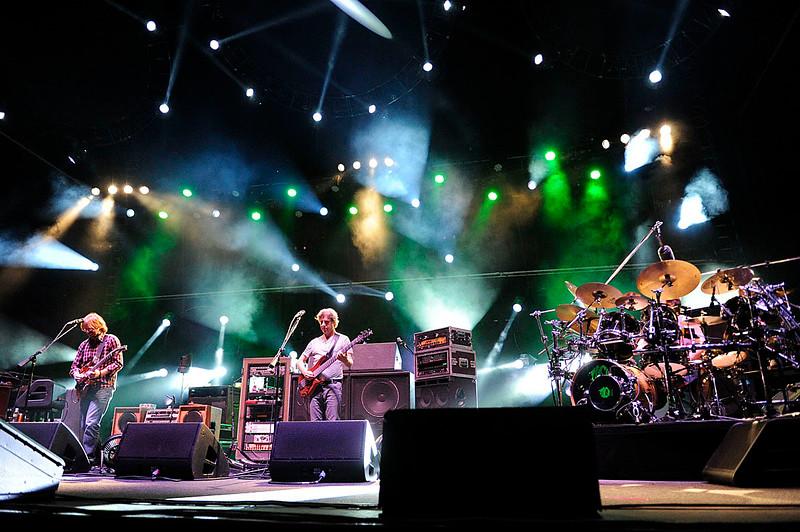 In what has become a solid yearly tradition, Phish brought three nights of high-energy improvisatory rock and roll to a sold-out Dick’s Sporting Goods Arena (soccer stadium) in Commerce City, Colorado this past Labor Day weekend. I was lucky enough to be in attendance for the Saturday (Night Two) and Sunday (Night Three) shows. Without any shows scheduled for the rest of the year, Phish closed off a historic summer, riding high on the wave of a solid thirteen-night residency at Madison Square Garden in New York City (Baker’s Dozen Run). 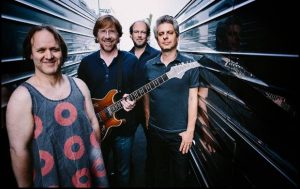 One of the most fun aspects of any Phish show is the fact that the musical performance is only one part (albeit a very large one) of the full “experience”.  Upon arriving at Dick’s Sporting Goods Park (lovingly referred to as “Phish Dick’s”), phans are met with a very large and accessible Shakedown Street, the open air market that began at the time of the Grateful Dead. Colorful vendors sell food, drinks, artwork, glass, t-shirts, and other less-than-legal items to pre-show partiers in what may be one of the most fun examples of unregulated capitalism.  I was impressed by the size of Dick’s Shakedown, and a walk through is a key part of the Phish show ritual.

Upon entering Dick’s itself, I was surprised by the size of the venue.  Dick’s is certainly no Meadowlands Stadium, but it is definitely larger than a venue such as Madison Square Garden, for example.  With a sold-out crowd, the venue became a cozy sea of bodies very quickly but never felt too uncomfortably tight.  A quick overview of the stage showed that the amazing Madison Square Garden Baker’s Dozen lighting rig was once again being used, with lighting director Chris Kuroda at the helm. (An aside: It is quite unusual for fans of a group to know the name of the lighting director, however, Kuroda’s lighting rig is such an integral part of the live Phish experience that fans have taken to calling him CK5, with ‘5′ designating him as the group’s fifth member.) 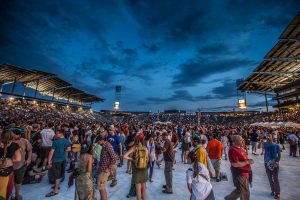 On Saturday night, the band came on slightly after 8 pm, launching into the classic “Simple”.  As an opener, “Simple” received a solid jam treatment, stretching out to fourteen minutes before giving way to a dance-party “Martian Monster”. Other Set One highlights included a very tight “Reba”, a rousing “Sand”, and a jammed-out “Wolfman’s Brother” towards the end of the set.  With the amount of jamming and exploration that occurred in Set One, there was a palpable “How can they possibly follow that up?” feeling throughout the crowd.

Overall, Set Two was a pure Saturday-night rock and roll dance party.  While jaded Phish veterans may have been slightly underwhelmed by the lack of deep exploratory jamming, the solid third quarter Fuego, Steam, and Chalkdust Torture section provided the band with a chance to go into full singalong rock-star mode. A fourth quarter “Mike’s Groove” included a beautiful “Winterqueen>What’s the Use?” segue within, before giving way to a blissful “Slave to the Traffic Light” to end the set.  Encores included a fun “The Lizards” and a chaotic “Run Like an Antelope.”

As phans filled the stadium for Sunday night, many gave predictions for what the night would hold. Popular predictions were for a huge “Tweezer” or “Down With Disease” to open Set Two, but what Set One would hold was anyone’s guess.  Set One opened with a novelty “Buffalo Bill” before giving way to a funky-but-brief “Moma Dance”. For me, the real highlight was the second quarter, beginning with “The Wedge”.  “The Wedge” was jammed on nicely, but gave way to an extremely exploratory and somewhat dark “46 Days”.  After settling back down on Earth, guitarist Trey Anastasio led the way into a full-speed-ahead “Bathtub Gin”.  This jam reached an intense peak, where, in a very cliche moment, I completely forgot what song I was listening to before being reminded by the re-appearance of the recognizable “Gin” theme.

Those who put their money and reputation on a huge Set Two opening “Down With Disease” were certainly paid in full. The jam out of this DWD was full Type I guitar-hero, with Trey soloing straight to an early peak before giving way to a dark and ambient section.  Out of this ambiance arose a slow building and intensely evil group jam, which became so full of psychedelic energy that it could best be described as an alien spaceship launch meets a Chernobyl-level reactor failure.  Segueing out of “Disease”, the first notes of “Light” were accompanied by thousands of glow sticks being thrown from the upper seating levels, giving the sense of a glow stick rainstorm, quickly leading the way into a more blissful jam, followed by the inspirational stadium-rock of “Rise”. Other personal Set Two highlights were a fun and adventurous “Piper” and a very tense but exhilarating “Possum”.

I was very pleased with the first encore, “Waste”, as it is one of the few Phish songs whose lyrics are somewhat meaningful to me, and despite being very similar each time, is very uplifting.  The final song of Dick’s 2017 was “First Tube”, giving phans one last chance to dance all of their energy out, and leaving them with the image of guitarist Trey Anastasio, bathed in white light, with guitar held high overhead. 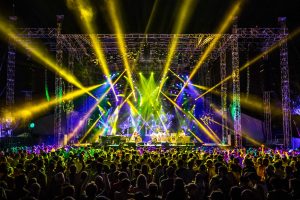 I cannot close out this review without including this personal story though, which I feel is truly representative of what Phish is about.  On Sunday night, I was only able to attend the show alone.  While sitting down to relax before the show, I started chatting with the guy next to me about the run of shows.  He soon introduced me to his crew, a diverse group of experienced phans, many who had met each other through Phish concerts alone, and soon I was part of a larger group, even if only for the show.  During set break though, I went to check my phone, only to be met with a black screen.  Dead phone.  This was definitely a problem for me, as the venue was about 11 miles away from where I was staying in Denver, I was alone, and had been planning to use Uber or Lyft to return after the show.

I mentioned this to Nate, one of the guys in the group that I had been happily pulled into.  He told me not to worry about it at all and to just enjoy the show because his crew would get me home. After the show ended, Nate and his crew told me to come with them, and they grabbed me an Uber back to their place in Denver, where I was able to charge my phone and meet a few more of their friends before making my way back to where I was staying.  I am so thankful to Nate, Matt, Trey, Casey, and all of the other guys and girls in their crew whose names escape me for helping me out despite just meeting me, and I will pass on that good energy for sure.  These are the kind of people that Phish attracts, and I am so glad to be a part of that scene. I encourage anyone who can to attend a Phish show and form their own opinion of “Phans” and the music that unites them.