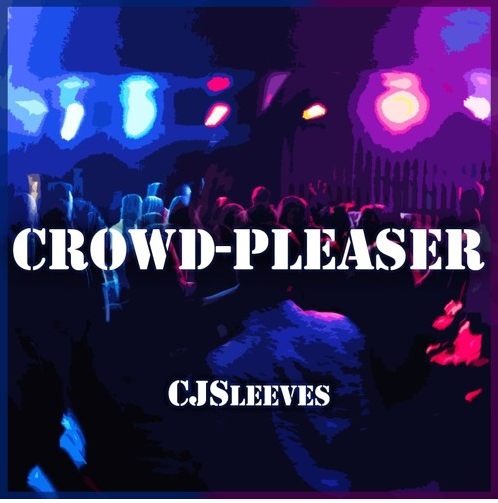 Here at K-UTE Radio, we love showing support to local artists because we believe in the beautiful art that they create on a constant basis. One of the artists that K-UTE has written about before is Provo, Utah artist CJSleeves. If you’re unfamiliar with him and would like to know more, check out K-UTE’s Artist Spotlight of CJSleeves from February 2019.

He has prepared a new single to be released very soon called “Crowd-Pleaser”. Sleeves is very confident in the track and says that “It speaks on the never-ending struggle artists go through to make the music that they want to make, and the music that people want to hear”. Topics included in the song are things that artists usually want from creating music (recognition, respect, for people to recognize the meaning in my songs) as well as money and clothes.

After listening to this track numerous times, I can confidently say that I really like it. The concept behind it is pretty unique and it is executed very well. The beat is also very quality and CJSleeves flows on it very well. His flow on this one is reminiscent of early Logic and that isn’t a bad thing at all. To be honest, this track is an earworm and you’ll probably find yourself repeating “they want it like like like that” in your head for the rest of the day, just like I have.

Just like most music that comes out, this track isn’t perfect. I think it could benefit from the incorporation of more melodies and maybe another verse. I really like the concept and would like to see it fleshed out even more. That isn’t a huge knock, but just something that I noticed.

Overall, I’d definitely recommend that you listen to this track. It showcases the talent of one of Utah’s up-and-coming hip hop artists. It is not perfect, but it is very good and is a huge earworm which is never a bad thing. I look forward to CJSleeve’s next track as well as a full project in the future to see how he can flow over multiple songs!