The Amulet: New Album from Circa Survive

The sixth studio album from Circa Survive is upon us, and since its recent release, my love for them has been revived! They’ve always strived to be viewed as more than an era-defined band that blows out the same catchy guitar riffs and for years. They want to embody more artistry in their music- To exist in their space as an evolving expression of art.

But, that’s not to say that they don’t have songs that have been replayed repeatedly, in fact, they have plenty of songs that live in their fans hearts. Songs in which the band is somewhat obligated to play on every tour in respect for their loyal following who hold these certain songs close to their heart as cherished symbols that affected their lives and personal growth at some point in their coming of age. However, these same fans have also completely embraced their art form as growing and changing expression.

Circa Survive fans are loyal and in-tune, which is good. Because they’re certainly a talented band that deserves such devotion to their art. But, there is something I love about Circa Survive, and to me, it’s not readily available in everything they’ve put out.

With that said, the new album has once again been nuanced with their signature ethereal sound, but this time it also incorporates different elements reminiscent of their first album Juterna, which has surprisingly piqued my interest. 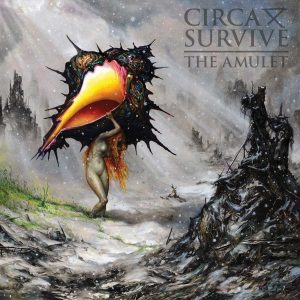 The new album Amulet is a dream filled with prolific lines and a beautiful juxtaposition of hard and soft. The drums and guitars produce a more complex sound than prior work and Greene’s vocals ebb and flow from delicate to growling screams, these refreshing elements combine to tell an emotional story that’s easy to get lost in a surreal daydream up until the very last track.

Beyond my observations regarding the refreshing newness of the album, Anthony Green himself has spoken on how he feels about the band making new music. – “Some of these songs are so f–king fun to play live, and I really look forward to getting to play these songs. That’s what excites me. That’s not to say I don’t feel similarly about the older material, or that I am not grateful for how that material has helped us, but it’s just like – when we play that stuff it’s the same as it has always been. But this material is new, and the connection I feel to it is exciting and fresh”

Green’s own views on his music are infectious and perfectly relates to how I feel about the new album. I like the old stuff, but it’s exciting to experience them once again put effort into tweaking their sound for a different vibe. Their excitement is shining through on every track and reaching me with a renewed sense of meaning and it’s a sound I can’t get enough of.