The Music of Uncut Gems 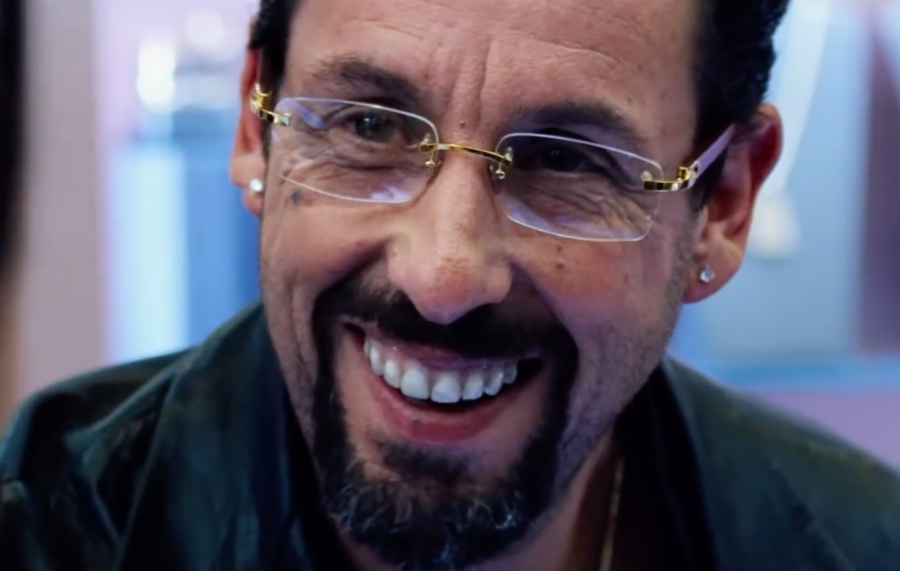 Notorious for starring in lackluster comedies, Adam Sandler rarely gets the opportunity to truly flex his acting muscles. As a veteran of Saturday Night Live, Sandler clearly does not lack talent, and his abilities are on full display in Uncut Gems. Directed by Josh and Benny Safdie, Uncut Gems takes us into the frenetic world of Howard Ratner, a jeweler to the rich and famous in Manhattan’s Diamond District. The movie is a cacophony of dialogue and action, with lines frequently being shouted over one another amidst a brisk pace. With additional strong performances from the likes of Julia Fox, the versatile Lakeith Stanfield, and a surprisingly good role from ex-NBA star Kevin Garnett, Uncut Gems has few acting holes.
Two Hours of Stress

Watching the film puts viewers through two hours of palpitating stress, as the audience learns to be weary of Howard’s choices. His penchant for gambling and inability to stay out of trouble can be frustrating at times. Despite this, Sandler’s portrayal of Howard allows viewers to empathize with the protagonist. Even with his increasingly foolish choices, Howard is someone you want to root for. This formula causes a buildup of tension which is suddenly released at the end, leaving you breathless in your seat realizing just how taught you were throughout the movie. I was never bored watching Uncut Gems, and found it to be one of my favorite movie-going experiences of the past year.
The Soundtrack
A large part of what makes this movie so compelling and immersive is the soundtrack. Composed and arranged by Daniel Lopatin (who the Safdies have tapped for a soundtrack before in Good Time), the score is a perfect complement to the cinematography. Right from the title card, spiraling synths fill the theater as a camera zooms into the depths of a mysterious and colorful black opal. During most movies, I find myself fusing what is happening on screen and with the soundtrack together, and not thinking about the music for most of the runtime. This was not the case with Uncut Gems, and that was a good thing.

Much of the score was constructed on a Moog One, the flagship Moog polyphonic synthesizer. Lopatin coaxes glitzy bells and plucks from the Moog, along with glittering pads panning from field to field. Many of the sounds have a slow attack, beginning as one texture, then evolving into something completely new. At times grand and full of reverb, and other times watery and modulated, the soundtrack helps move Howard from one chaotic situation to the next.

Mixed in throughout the score are various choir stabs, percussive elements, and even smooth saxophones and woodwinds. This helps to break up the saturation of synthesis and coldness of the analogue sounds without being overbearing. I found this to be a nice balance which only further cultivated the unique atmosphere.

My favorite track from the score is “School Play.” The song follows Howard as he is chased by loansharks. There is a slow rise to the song, which features a bouncy synth riff, reminiscent of Roland’s TB-303, and droning accent sounds. The track climbs to its frantic peak before crumbling into fading distorted strings. Another standout is the aptly named “F*** You Howard.” This track marches along while Howard gets into an explosive fight with his mistress, played by Julia Fox. The neoclassical style is bolstered by the sounds of tape recorded choirs and a soft–but bright–lead.

Leaving the theater, I found the score for Uncut Gems to be wholly original and captivating. This is not a soundtrack with one or two songs catching your attention that you may revisit once the movie is over. The entire score begs to be listened to again. Even when walking through the snowy U of U campus on a cold day, listening to the soundtrack makes you feel like Howard navigating the bustling streets of Manhattan, from one doomed pursuit to the next.

You can listen to the full soundtrack and see more of Daniel Lopatin’s work here.

K-UTE Radio/University of Utah do not own any images in this piece.