The Wacky And Weird You Need to Hear: IRONTOM

First Things First: Why the Wacky and Weird?
Let’s talk about the weird side of music. Those random groups you happen to find while surfing the depths of YouTube. That opener at the concert you went to last week. Yes, even that band your second cousin showed you at your last family reunion. The Wacky and Weird You Need to Hear aims to enlighten you on all things strange and NOT mainstream. This series will set out to open your eyes to the big wide world of music. Music isn’t just today’s top 20 or Cardi B’s newest album. Music should be something that individuals connect with and can relate to you personally. That’s why we’re here, to enhance your relationship with music. Welcome to the depths of alternative music my friends. Welcome to IRONTOM. 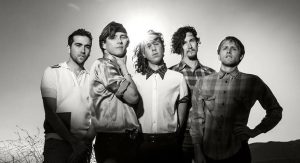 The indie-rock group debuted in Los Angeles, California in 2012. It’s five members can bring serious hype during their live performances. I saw them at The Complex in Salt Lake City accompanying AWOLNATION at their show in March. It isn’t very often I see openers make a crowd go crazy, but IRONTOM knocked concert junkies’ socks off! Their sound is reminiscent of a classic 90’s garage band mixed in with synthesizers creating a modern vibe. Rehashing old musical themes with modern technology is something that is seen in a good portion of today’s alternative music.

Now, let’s talk about stage presence. As I said earlier these guys have serious skills. 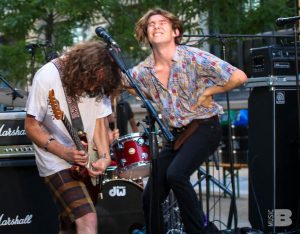 Their main vocalist, Harry Hayes, is an INSANE performer. He moved from one end of the stage to another putting his all into the music. His hands flailed about the air and along his body with an amazing energy that showcased the tenacity of IRONTOM. The other band members fed off his energy and before long everyone in the crowd had their hands in the air as IRONTOM rocked the house.

From their eccentric vocalist to their classic 90’s vibe, IRONTOM is one of those groups you find and don’t want to share. Their music is so gold you wanna keep it all to yourself. So listen, don’t tell your friends, and I will hear from you next time.