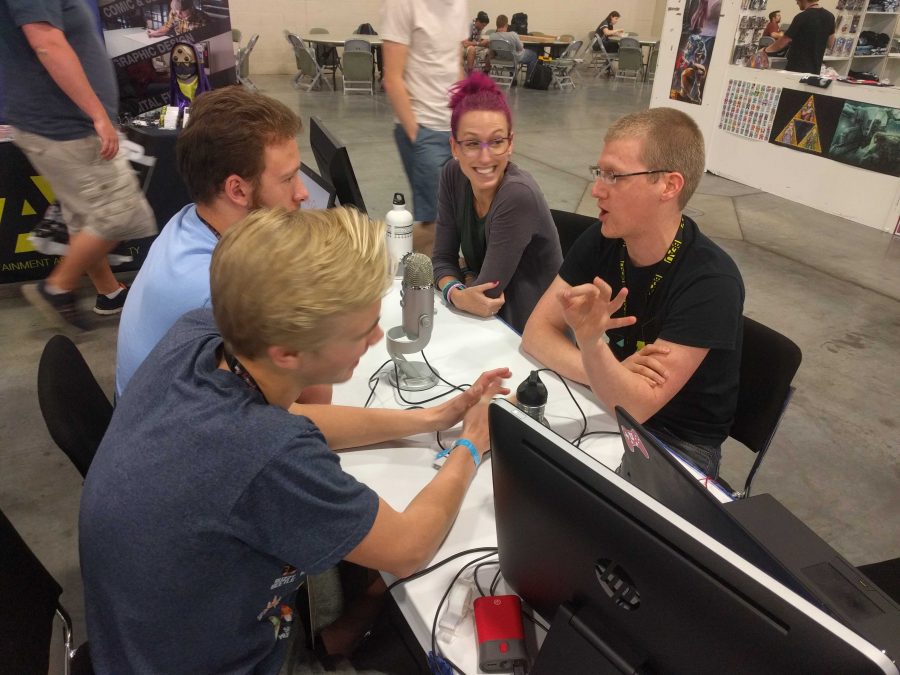 We are recording from the floors of the second annual Salt Lake Gaming Con at the Sandy Expo Center. This event is a gamers’ paradise with countless games to play, demo and enjoy. There is still one day left, so don’t hesitate to come on down.

SLGC has a special place in our geek hearts since at the original Salt Lake Gaming Con, The Geekwave did its first episode. So far we have had a pretty good run. This year The Utah Games Guild has been so courteous to let us use their booth for the episode and Fresco Press has generously donated t-Shirts for us to give away on Facebook. Make sure to like this episodes Facebook post for a chance to win. If you win show up at the Fresco Press Booth on Saturday, June 4th and pick up your t-shirt. The three prizes are a visually pleasing Boba Fett t-shirt or one of two Salt Lake Gaming Con shirts.

On this special episode, we sit down with three different development teams from The Utah Games Guild. To start it off, we speak to Lanie a director of The Utah Games Guild and Josh the developer of Legacy of The Elder Star. We chat it up about the con and Josh’s game which releases on June 7th. In fact, we will have some Steam Keys to give away next week. Legacy of The Elder Star is a really fun and pretty action shooter that is accessible to everyone. Definitely check it out!

Next up, we talk to Marc and Dave, two of three brothers who have been working on Crashnauts, a futuristic, 2D, local-multiplayer and insanely entertaining game. Growing up playing similar games these brothers bonded. Wanting to give others a similar experience and drawing inspiration from games like Towerfall Ascension, Crashnauts was born. Make sure to stay tuned for more updates from these rocking developers!

Last but not least, we sat down with David and Nick developers of We Need to Go Deeper. This co-op, submarine experience inspired by 20,000 Leagues Under The Sea is a blast for a group of sea hardened or not sea hardened friends. We hear what it is like to switch engines and we are not talking about on the yellow submarine. From Game Maker to Unity, We Need to Go Deeper is a great time and we look forward to trying to captain our own submarine in the future.